With a rich history of immigration, it’s no surprise the Illawarra is littered with an array of amazing international food. Thai curries, Middle Eastern mixed plates, and cheap and cheerful Chinese are the staples for most, however many of the best cultural gems you won’t find on Instagram. Tucked away in car parks, in the shadow of the Steelworks or next to the hairdresser at your local shops is a trove of cuisine to be explored, you just have to know where to look… and what to get. So here’s our guide to our favourite, lesser-known eats from around the region. 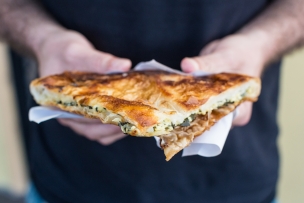 With a high former Yugoslavian population, the southern suburbs of the Illawarra have a bunch of great shops specialising in the art of Burek. This Balkan snack captures the perfect balance – layers of flaky pastry with cheese and spinach or ground meat fillings. Most of the varieties you’ll find in the region are a Macedonian round-pie style, of which you get a huge quarter slice for about six bucks. For the original experience head to Bitola, or 5 star Burek on Newcastle Street in Cringila. Family owned, both shops have been there for over 30 years, and have layering burek down to a science. Other notable mentions are King Burek in Warrawong or Hot Burek Pastry in Port Kembla. 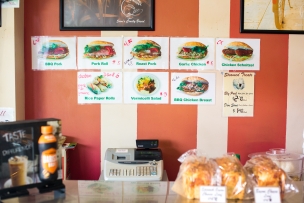 Sometimes overshadowed by their Thai neighbours, Vietnamese cuisine has seen an upsurge in popularity in recent years, and there’s plenty of great spots around the Gong. Menus are always filled with stir-fried staples, but for a more authentic experience try something different. Start with bánh xèo – a crispy rice pancake stuffed with fresh herbs and a choice of meat, seafood or tofu. If you’re unfamiliar with pho, you’re missing out on something truly special. This amazingly aromatic Vietnamese rice noodle soup nourishes the soul. It’s all about the broth and the best versions are found at An Chut Chut and Little Vietnam in Wollongong or Nha Trang in Fairy Meadow.

The other star of the Vietnamese menu is bánh mì. Found in the most unassuming Vietnamese bakeries, these crusty torpedo rolls are filled with your choice of roasted or barbecued meats, paired with pickled vegies, spring onions, herbs and an optional, but very necessary, hit of chilli. You have to look hard sometimes but a glass box with a laminated sticker saying “pork rolls” is always a good sign. Sam’s Crusty Bread in Corrimal has a big bánh mì selection, or check out QP Bakery in Berkeley and the practically named Thirroul Hot Bread.

With the bulk of the population buying their groceries from the major supermarkets, what’s found in our trolleys can become somewhat repetitive. Luckily, with our vast Mediterranean population, European delis are common throughout the region, and there are a few tips you can use to ensure your cupboards and fridge are stocked with an amazing variety of Euro produce. For all your cured meat needs, don’t shy away from talking to the experts and having them slice for you. Ask them about their favourite cuts and don’t be afraid to try something new. Go for guanciale over prosciutto or mortadella instead of ham. Employ this same tactic with cheeses – ask questions, be adventurous and have it cut fresh. Be sure to also explore the shelves lined with tins and jars. From Greek dolma and Albanian Ajvar (a sweet capsicum relish), to Spanish sardines and Polish gherkins there are some preserved beauties in the aisles, and if you can’t read the label, that’s probably a good thing. Try Leisure Coast in Fairy Meadow, Country Grocer in Unanderra or Euro Foods in Wollongong (which also has a liquor license for all your grappa, rakija, and Eastern European wine needs). 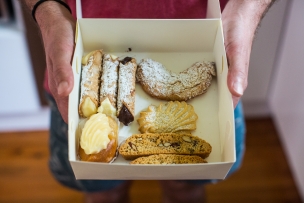 our local Italian restaurant is just about the most dependable mid-week meal out there. Pizza or pasta, salad and a glass of wine, you can’t really go wrong. But what’s for dessert? Well, Italian patisserie is alive and well in the Illawarra and Tonitto Cakes in Port Kembla and Pasticceria Massimo Papa in Fairy Meadow offer some of the best Italian sweets you’ll find anywhere. Think mouth-watering sweet ricotta cannoli, rum-drenched baba, buttery almond shortbread, or crisp pistachio biscotti. You’ll likely leave with more than intended. And you’ll probably eat half of it in the car on your way home.

If you’re unfamiliar with the wonders that grace the shelves of every Asian grocer, prepare to be overwhelmed with a cornucopia of Eastern treasures that excite the senses. Start at the fridge section and choose from a variety of exotic mushrooms, fresh noodles and tofu or homemade kimchi. Swing by the freezers where the pick is definitely the frozen dumplings. Browse the aisles and stock up on condiments like sesame oil, hoisin, XO sauce or kewpie mayo and for the chilli lovers, try some gochujang (a delicious and versatile Korean fermented chilli paste) or grab a bulk bottle of the ubiquitous sriracha. Some of the region’s top spots include Wan Long Oriental supermarket in Wollongong, Yun Mart Korean Grocery in Fairy Meadow and Yi Jia Supermarket in Gwynneville. 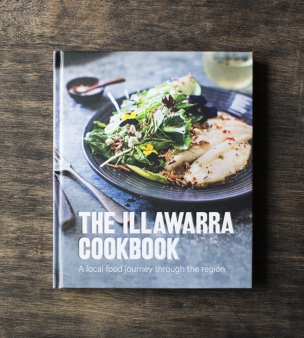 Go behind-the-scenes of the Illawarra’s vibrant culinary industry with The Illawarra Cookbook (2017), a hard-cover, coffee table-style cookbook featuring 55 recipes from the region’s best cafes, restaurants and bars, including Caveau, Kneading Ruby, Dagwood, The Scarborough Hotel, Sandygoodwich and Earthwalker + Co. Filled with stunning regional imagery and features of the region’s artisan producers, farmers and small businesses– read, listen, cook and enjoy the journey. Available as a printed publication, and in eBook format.